EU Press release on breach of the WAll in Rafah 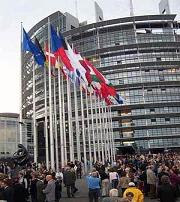 Press Release, By Luisa Morgantini - Vice-President of the European Parliament

Rafah: the breach in the wall is an act of freedom and a strong warning to the EU, the Quartet and Egypt

"The thousands of Palestinians crossing the Rafah border point these last hours, the breach in the wall and the breaking of the siege decided by Israel against the civil population, are all true acts of resistance and an affirmation of the freedom of that people, not the Qassam rockets being fired at Israeli civilians that contravene international law, or the bloodshed inflicted on the Palestinian civil population perpetuated by Israeli raids.

When walls fall down there's always a sense of freedom. The images we are getting from southern Gaza, with men and women pouring into Egypt in order to buy essential supplies such as food and medicines that are nowhere to be found because of four days of total closure and black out in the Gaza Strip, are the natural result of the inhuman siege imposed by Israel: as rightly declared by President Mahmoud Abbas, the responsibility lies with Israeli policy, which has forced people who are completely worn out to cross the borders of the cage in which they are imprisoned and collectively punished with complete disregard for humanity and international law.

This is the predictable outcome of a policy of isolation, not only towards Hamas, but also the one and a half million Gaza inhabitants, a policy that the European Union has also supported by endorsing de facto the embargo decided by Israel. Hamas risks to become stronger as a result of this situation, not weaker as can be seen by all the demonstrations that took place in the Islamic world during these cold and dark days in Gaza.

People pouring into Egypt and also people returning to Gaza after forced exile bringing any kinds of goods, show all of us the tragedy of a besieged but never resigned population, a population that has seen women in the front line of the demonstration struggling and being harshly repressed yesterday: these are the non-violent actions that should be supported and in which all Palestinians should gain renewed strength and unity.

I hope they will not be used by anyone to apply a definitive separation of Gaza and the West Bank in what should be the Palestinian State within the occupied territories of '67.

But for sure they are also a warning for the International Community as a whole, first and foremost the Quartet, the European Union and Egypt, which are responsible for the transit of goods and people through Rafah Crossing. Unfortunately, they have never been able to accomplish this task.

I sincerely hope that Rafah border crossing with Egypt will be immediately opened and the legal freedom of movement for people and goods be established, not the arbitrary closures by Israel. Arms trafficking can be stopped without bombing and without enclosing the population in an open-air prison......"
Posted by Tony at 10:27 AM