Freedom for Gaza (but for one day only) 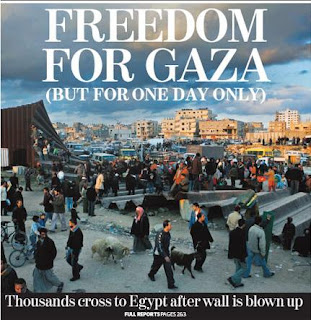 Hole in the wall provides relief from misery of Israeli blockade

By Donald Macintyre in Rafah, Egypt

"...."I don't know who did it," he said cheerfully. "But this is an agreement between two peoples, not between governments.".....

And certainly the steel-helmeted Egyptian border guards standing by their armoured personnel carriers seemed pleased enough to see the tens of thousands of Palestinian men, women and children who squeezed between the now flattened eight- metre concrete slabs of wall or scrambled across the furrows in the now uselessly prone and twisted corrugated iron barrier.

One, in camouflage fatigues, surrounded by curious small boys and standing by Rafah-Sinai's Shuhada Mosque, but with no visible weapon and refusing to give his name, said: "Everything is good. We are very happy at what happened." Had his unit received instructions on how to handle the day-long mass Palestinian break-out? "Nobody told us anything," he replied.

This may not have been quite the collapse of the Berlin Wall. But if anyone doubted the impact of a prolonged siege on an imprisoned people, they had the evidence yesterday.....

But even if, as seems highly probable, Hamas were themselves responsible for blowing open the wall, it was the huge masses of civilian Palestinians starved since June of any goods other than the absolute basics – and for much of the past week even of those – which then overwhelmed the border yesterday....."
Posted by Tony at 2:32 AM