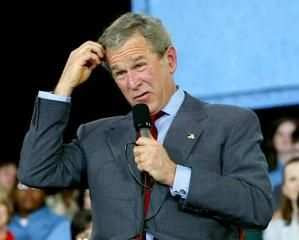 "Bush said in a speech on Thursday that he hopes Iraq will be like Israel, a democracy that faces terrorist violence but manages to retain its democratic character......These words may be the stupidest ones ever uttered by a US president. Given their likely impact on the US war effort in the Middle East, they are downright criminal.

The US political elite just doesn't get it. Israel is not popular in the Middle East, and it isn't because Middle Easterners are bigots. It is because Israel is coded as the last European colonial presence in the region, an heir to French Algeria, British Egypt, and Dutch Indonesia-- and because the Israelis pugnaciously continue to try to colonize neighboring bits of territory......

Let's just take the analogy seriously for a moment. Israel proper is a democracy of sorts, though its 1 million Arab citizens are in a second class position. But it rules over several million stateless Palestinians who lack even the pretence of self-rule. It is hard to characterize a country as a democracy when it has millions of disenfranchised subjects. Bush manages to only think about Jewish Israelis in the above analogy, wiping out millions of other residents of geographical Palestine who don't get to participate in 'democracy' or exercise popular sovereignty......

So who would play the Palestinians in Bush's analogy? Obviously, it would be the Sunni Arabs, who apparently are meant to be cordoned off from the rest of Iraqis and put behind massive walls and barbed wire, and deprived of political power. That is not a desirable outcome and is not politically or militarily tenable in the long run.....

....They say that the US military occupation of Iraq, in alliance with Shiites, has turned the Sunni Arabs into Palestinians! Bush could not have handed the guerrillas a better rhetorical gift. I do not think it is an exaggeration to say that DVD's of Bush's comments will be spread around as a recruiting tool for jihadis, and that US troops will certainly be killed as a result of this speech....."
Posted by Tony at 7:38 AM