Cheney, Master of Stealth, Readies Himself For The Final Act of ‘Imperial’ Vice-Presidency 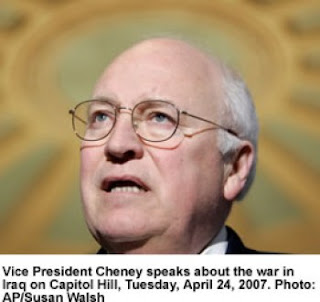 "Operating in the shadows, where he can best achieve his deeply conservative aims, Dick Cheney enjoys the total confidence of President George Bush and is sometimes described as the “Imperial” Vice-President.

Towards the end of every re-elected US President’s second term, the opposition in Congress always smells the opportunity to assert itself. This time the target is Dick Cheney and subpoenas are raining down on his head from the Senate for the release of documents that could implicate him in illegal acts. His record for outflanking his enemies is such that there is little cause for optimism among his opponents who would have him impeached.

Whether giving a green light for the US to torture suspects to the point of “organ failure… or even death”, to rolling back environmental measures, or clearing the way for the invasion of Iraq, Cheney’s fingerprints are all over the most controversial aspects of the Bush years.

After more than six years of his rule, the US is waking up to the reality that it has been a Cheney-Bush affair in all but name and despite being written off on numerous occasions, the Vice-President’s ability to influence events remains unrivalled. Although he is approaching the final months of his career and will never run for office again, more surprises may be in store as he seeks to complete his agenda.

Cheney will have his heart pacemaker installed next month and even with mortality knocking on the door, there is every possibility he will engineer yet another foreign policy surprise, possibly against Iran......"
Posted by Tony at 7:05 AM