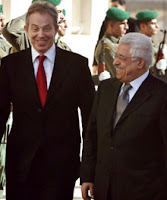 "President Bush has a new role in mind for Tony Blair: No, no, not, as is being widely reported, as a “Middle East peace envoy.” Goodness, no, the U.S. has no need of such a thing, because that would inevitably involve putting pressure on Israel. Blair’s new job, in fact, will be that of tutor to the Palestinian Authority, helping it to “develop effective institutions.” He’s getting the job, it seems, because, as the New York Times blithely ventured, he “would bring to the job a higher stature, and might also bring a credibility — particularly with the Arab world — that an American might not be able to match.” (Uh, right, because unlike Blair, an American might be seen as somehow implicated in the Bush Administration’s Middle East misadventures…)

Blair’s willingness to take the job certainly indicates that he’s lost none of his sense of humor. Because there are two elements of the story that are a dead giveaway of the fact that this is in no way a serious intervention in moving the Israeli-Palestinian conflict towards a resolution: The first is that the previous occupant of the position, former World Bank chief Jim Wolfensohn, resigned the post precisely because he recognized that there was no way the Palestinians could build effective institutions under the conditions of occupation imposed on them, particularly after the U.S. decided to cut off all financial assistance after the election of Hamas. Wolfensohn made clear that his task had become impossible once he was forbidden to have contact with Hamas.

Indeed, the very idea that the state of Palestinian insitutions is somehow a prime impediment to progress towards a two-state peace agreement is a fiction propagated by Ariel Sharon and happily swallowed by the Bush Administration — so much so that Washington has now performed a complete pirouette, by demanding that Mahmoud Abbas behave even more like Yasser Arafat did in the days when Yasser Arafat’s style of governance was held to be the major impediment to peace. The Palestinians can’t build effective institutions because they’re under occupation, and because the West appears unwilling to tolerate Palestinian democracy. Which brings us to the second reason Blair’s posting is obviously a joke: His new address. Blair, it is reported, will base himself in Jerusalem and Ramallah, although the Israelis and U.S. make clear that his mandate will not be to mediate between them, but rather to supervise Palestinian governance. But if he were seriously intervening to “mentor” a process that could restore some hope of progress towards a peace agreement, it’s pretty obvious that his office would have to be neither in Ramallah or Jerusalem, but in Washington, D.C. "
Posted by Tony at 12:27 PM