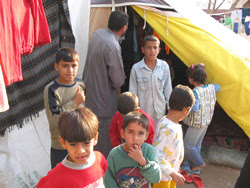 "DAMASCUS/BAGHDAD, 27 June 2007 (IRIN) - The plight of Palestinian refugees fleeing violence in Iraq and stranded in camps on the Syrian-Iraqi border is continuing to deteriorate as the summer heat intensifies and a solution remains elusive.

"Children in particular are developing medical conditions that they've never had before simply because of the high heat and dust storms," said Sybella Wilkes, spokesperson for the UN High Commissioner for Refugees (UNHCR) in Syria.
The refugees are becoming increasingly desperate......

It is now over a year that refugees have been confined to Al-Tanf camp without a solution to their plight.

In a statement on 26 June, the UNHCR said urgent medical care as well as an immediate humanitarian solution was needed for the Palestinian refugees stranded in camps on the Iraqi-Syria border.

"The situation of more than 1,400 Palestinians is deteriorating by the day. We urge countries in the region - and further afield - to help end their suffering," UNHCR spokesperson Jennifer Pagonis said in a statement on 26 June......."
Posted by Tony at 5:10 AM