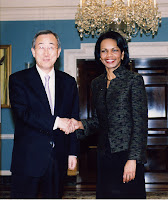 Ban: UN Resolution 1701 has been breached

"The Secretary-General of the United Nations, Ban Ki-moon, issued a report to the UN Security Council on Friday saying that Syria and Iran are sending Hezbollah anti-tank and anti-aircraft weapons across the Syria-Lebanon border.

In the report, Ban expressed 'deep concern' that Lebanon's continuing internal political instability will hinder its implementation of UN Security Council Resolution 1701, which calls for the disarmament of all militant groups in the region near its border with Israel.

The UN chief issued the report after receiving information from both Israel and Lebanon regarding blatant violations of the resolution.

Israeli sources had informed him that Syria and Iran have transferred sophisticated weaponry across the border weekly, including long-range rockets and anti-tank and anti-aircraft defence systems. Beirut informed him that the Lebanese army had sighted four trucks laden with rockets heading for an outpost of the radical Popular Front for the Liberation of Palestine-General Command in Lebanon.

"Weapons shipments on this scale would allow Hezbollah to reach a level of armament equal to that of last year," the report says, referring to the Second Lebanon War between Israel and Hezbollah in July 2006.

The report said Syria has denied any involvement in the arms transfers into Lebanon.

"The Lebanon government has stated to me that it has a vital interest in controlling its borders to prevent the smuggling of arms, munitions and personnel into its territory," Ban said in the report.

"The Syrian Arab Republic, other regional states and the Islamic Republic of Iran have a particular responsibility to ensure that the provisions related to the arms embargo of resolution 1701 ... are fully respected," Ban said....."
Posted by Tony at 12:22 PM