Should Spain Withdraw from Lebanon? 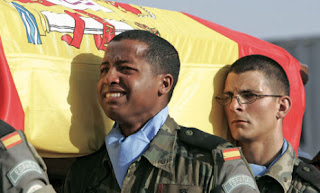 Zapatero desires an impossible miracle: that Spanish troops in Lebanon serve "the cause of peace and solidarity", as he stated in the Spanish Congress, while at the same time selling weapons to Israel, joining Israel in military maneuvers, and playing along with the American policy in the region.

A Very Good Article
By Agustin Velloso in Madrid
Special to PalestineChronicle.com

".....When this happens on a large scale, when Israel decides to avenge last summer's defeat, when Syria or Iran are threatened or attacked, when the Palestinian occupied territories burn again, well, when there is a recrudescence in another tragedy in the Middle East, one will witness how this saga of the Spanish Left's "enlightened" imperialism, inexplicably in partnership with the criminal western imperialism, will end.

The government can repeat forever that the military mission is one of peace and that the Spanish international position requires its presence in Lebanon and in Afghanistan, but it will not meet with Arab or Muslim approval no matter how many cans of condensed milk or blankets are distributed in the Middle East -- they know that Spain is allied with Israel, the aggressor against Lebanon, Palestine, Syria and the main instigator of the war against Iraq and the possible one against Iran....

This government of "lefts" uses the mantle of UN mandates, sweet words about peace, and photographs of smiling Lebanese children next to young Spanish soldiers to hide the reality from the Spanish public: That UNIFIL, the UN armed forces in Lebanon, has been in place for nearly thirty years and it hasn’t prevented the numerous Israeli aggressions against Lebanon, which have resulted in thousands of deaths, the destruction of the Lebanese infrastructure and the planting of millions of land mines. Not only has Israel not been punished for its aggression, but it actually benefits from the economic, political and military support of the "peace makers".....

UN Security Council resolution 1701 extended UNIFIL's mandate to "coordinate", "assist", and other hollow words, while in reality it is meant to server the US and Israeli interests....."
Posted by Tony at 7:25 AM