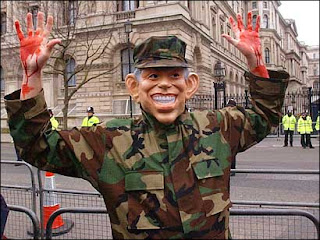 "A state-run Syrian newspaper on Saturday lambasted Tony's Blair's appointment as a special Middle East envoy, saying a man with "hands smeared with innocents' blood" cannot be a peace envoy.....

"How could a liar, who is directly connected with Washington and who is a staunch proponent of the extremist rightist ideology, be a peace envoy?" the Tishrin newspaper said in a front-page editorial. "Who would trust his promises? Would he work truthfully for peace so long as he personally doesn't know, as we think, the meaning of the word 'truth'?"

In some Arab countries, including Syria, Blair has been criticized on the suspicion that he is a lackey of U.S. President George W. Bush and for supporting the U.S.-led war in Iraq. "Can we forget that the new peace envoy repeats literally what is being dictated upon him by the lowest-ranking official at the White House?" Tishrin said.

It added that Blair's "U.S.-Israeli policy" is to be blamed for most of the "catastrophes and ordeals" that have befallen on the Arabs, and criticized his attempts to isolate Syria and impose sanctions on it.

"We would not pin great hopes on his mission simply because a war man could never be a peace advocate or peace envoy," the paper said. "This is the first time throughout history in which we see a peace envoy with his hands smeared with innocents' blood."...."
Posted by Tony at 7:49 AM