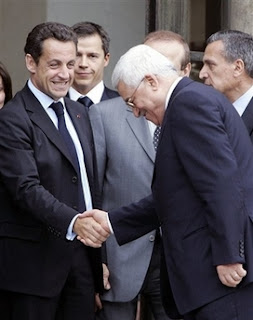 "Palestinian Authority Chairman Mahmoud Abbas appealed Friday for an international force for Gaza so the divided Palestinians can hold new elections, and insisted he was determined to isolate the militant Hamas.

Abbas, in Paris for his first talks with Nicolas Sarkozy since he was elected French president last month, won France's full support for the Palestinian Authority - $20 million in aid......

"I proposed an international force in Gaza to Sarkozy to ensure the elections can be held peacefully," Abbas said. "Elections necessitate a certain stability in security." Israel, the UN and E.U. have said they would consider the idea of an international force, though Hamas has rejected it.....

"We want your victory. You are the guarantor of peace," Sarkozy told Abbas.....

Sarkozy is to continue talks on the Middle East with Jordanian King Abdullah II and Foreign Minister Tzipi Livni next week......"
Posted by Tony at 2:28 PM