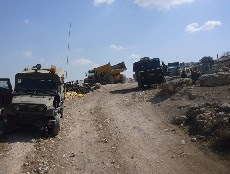 "At least 200 Palestinian residents of Kherbet Qessa in the Hebron district were left homeless after being forcibly evacuated by the Israeli army in order to establish the annexation wall in their place.

On October,29, 2007 Israeli military expelled 200 Palestinians from their homes in Kherbet Qessa, a town established in the fifties and largely inhabited by refugees who came from Beit Jebreen village.

An illegal Israeli checkpoint called Tarqumia checkpoint was established near the town. Residents of the town had lived in tents and caves and earned there living from livestock.

The illegal wall separated the town from the rest of the West Bank causing misery to the residents as they found themselves isolated from other West Bank areas.

A year and a half earlier the Israeli army had threatened to demolish the villagers' homes, claiming that they were not in possession of a valid construction license.

On 25/10/2007 the army placed housing demolition orders under stones at the entrance to the village.

Four days later, bulldozers supported by Israeli patrols broke into the area and started demolishing tents and caves before giving the occupants the chance to collect their belongings.

According to testimonies presented by residents to B'Tselem, one resident was attacked and assaulted by an Israeli soldier as he tried to protect his livestock which were inside one of the caves.

The army confiscated farming equipment and dumped it to the eastern side of the wall.Most of the residents' property was left buried under the rubble.An Israeli officer forced residents to evacuate the area threatening to arrest them and confiscate their livestock.

The following day a car belonging to the Parks and nature authority came to the area and forced the residents to leave their homes.

Currently most of the village residents are homeless and forced to rent temporary housing in the nearby village of Ethana."
Posted by Tony at 9:17 AM