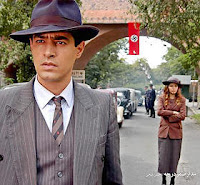 The scene is wartime Paris. Swastikas adorn the Champs Elysees.

"Jackbooted Nazis are rounding up Jews for the concentration camps, while terrified Parisians look on.

It is a familiar plot for a television blockbuster. And this time the formula has been as popular as ever, drawing in massive audiences week after week.

The only difference is that this is a series made for Iranian state TV.....

"There's been a menu of demonising Iran to portray it as anti-Jewish, which is not the case at all," argues Iranian commentator and film-maker Nader Talebzadeh.

"This popular television series, which is visually also very attractive, has tackled this issue because of all the propaganda against Iran."

The series has gone a step beyond simply acknowledging the Holocaust.

The central character is an Iranian diplomat, who provides false Iranian passports to enable Jews to flee the Nazi-occupied France, a sort of the Iranian Schindler. He even has a love affair with a Jewish woman......."
Posted by Tony at 8:15 AM