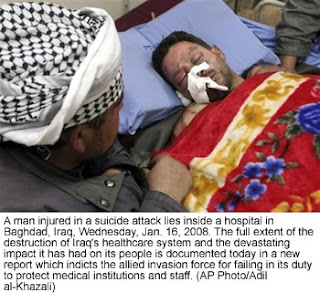 by Sarah Boseley
The Guardian

"The full extent of the destruction of Iraq’s healthcare system and the devastating impact it has had on its people is documented today in a new report which indicts the allied invasion force for failing in its duty to protect medical institutions and staff.

The report, by an independent team of researchers and advisers from Iraq, the UK, the US and elsewhere, says the provision of healthcare “has become increasingly difficult” since the invasion. “Doctors and nurses have emigrated en masse, exacerbating existing staff shortages.

“The health system is in disarray owing to the lack of an institutional framework, intermittent electricity, unsafe water, and frequent violations of medical neutrality. The ministry of health and local health authorities are mostly unable to meet these huge challenges, while the activities of UN agencies and non-governmental organisations are severely limited.”

The report, by the organisation Medact, tells how the charges for healthcare, abolished by the coalition forces in a flurry of idealism, have been quietly reinstated by health authorities unable to pay salaries and buy the drugs they need. Worse, patients now have to pay bribes to get into hospital......"
Posted by Tony at 11:13 AM