On Walls, Castles and Embassies

The cultural rift between the U.S. and the Arab World has widened with each successive administration since the days of Eisenhower years of the early 50s.

"......Something there is that doesn’t love any wall nor its cleansing euphemisms—separation wall, great wall, electronic fence, green zone, green line, a castle or an embassy. Their architectures and configurations are a measure of the gap between those who erect them and those who live in their shadows...... 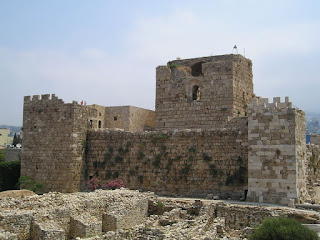 The Crusaders were not known for building walls in the Middle East; they built castles that formed defense perimeters and spheres of influence. These castles dotted the eastern shores of the Mediterranean from the northern borders of Egypt to the southern borders of Anatolia (modern Turkey). Their sites, particularly in Palestine and Syria (including modern Lebanon), define their geo-political and economic significance. While the majority of these castle builders and settlers vanished from the scene, a few remained to live peacefully with the societies they had once occupied......

The Ottoman Turks, who ruled much of the Middle East for several centuries, built castles of sorts, walled cities to be more accurate.....Although Turkish was the lingua franca of the time, the Ottoman society adopted Islam and much of the Muslim and Byzantine cultures. In retrospect, these wall-and-castle builders and occupiers of Arab land may have been far more tolerant of ethnic and religious differences than their latter-day Western crusaders.....

British and French walls and castles in the Middle East were horses of a different color: fractionalization of the Arab society, almost too tribal levels. The new crusaders created political, ethnic and religious boundaries; stretched barbed-wire fences across miles of Arab land; controlled movement of population by means of identity cards, permanent and on-the-fly checkpoints, and by brute military force, i.e., house searches and house demolitions, curfews, summary executions, banishment, fines and taxes, etc. The walls and castles of these latter-day crusaders were pervasive and, as history would later reveal, more insidious and sinister than those of the Crusaders......

Nowhere else in the world today does America have more firepower than in the culturally alienated Middle East: armadas in the Mediterranean Sea, the Red Sea, Indian Ocean and the Gulf (of…). America owns the skies over the Middle East and North Africa; its aircraft have access to bases in Egypt, Jordan, and Saudi Arabia and in any of the UA Emirates, in particular Kuwait. America’s wall around the Arab World is nearly impenetrable; its castles within this wall are far more numerous than the Crusaders’, and surely far more sinister, especially when one considers that the U.S. is a most religious country and one whose political machine is greased by 80 million Evangelicals, Dispensationalists, etc. 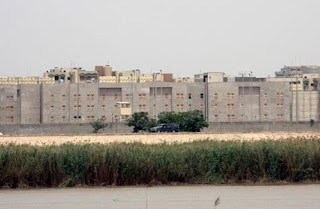 The largest U.S. embassy in the world in a country that has been driven back “to the Stone Age”; it is as incongruous a concept in political science as it is in human relations......"
Posted by Tony at 5:06 AM