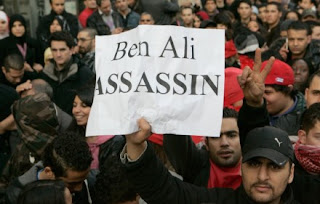 Does Saudi Arabia deserve thanks for taking in dictators such as Tunisia's ousted president?

"Having fled from the country he ruled for 23 years, ex-President Zine el-Abidin Ben Ali has landed in the Red Sea city of Jeddah, Saudi Arabia, where the government has "welcomed" him "due to the current extraordinary circumstances" in Tunisia. He has had an entirely different reception from bloggers in the kingdom and the region, however, varying from calls for demonstrations outside Saudi embassies in Arab countries by those who want Ben Ali swiftly brought to justice, to those noting that Jeddah has of late "been plagued by torrential rain, overflowing sewage, insects and now the Tunisian ex-president".

In some ways it is not the most obvious refuge for Ben Ali. He may have been a brother Arab leader, but he will be expected to take a very different attitude to the religion of which he is nominally a member in his new home. The Financial Times reports that "Saudi Islamists pointed to Mr Ben Ali's secular policies which they said marginalised Islam. One said on his Twitter feed that the harshest punishment against Ben Ali, who banned "the call for prayer, Koran, and the veil is to be surrounded by veiled and munaqabat [face-covered] women and the sound of recital of Koran."

However, after several other countries including France refused to take him in, Ben Ali may have had little choice. The Arab Network for Human Rights Information now warns that Saudi Arabia is becoming a "refuge for dictators", having granted entry to Uganda's Idi Amin and Pakistan's Nawaz Sharif in the past......"
Posted by Tony at 8:15 AM