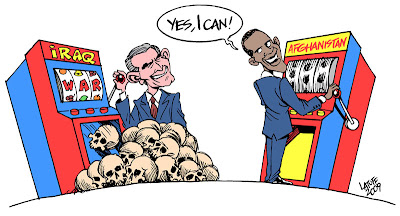 "Fifty years after Dwight D. Eisenhower’s Jan. 17, 1961, speech on the “military-industrial complex,” that threat has morphed into a far more powerful and sinister force than Eisenhower could have imagined. It has become a “permanent war state,” with the power to keep the United States at war continuously for the indefinite future.

But despite their seeming invulnerability, the vested interests behind U.S. militarism have been seriously shaken twice in the past four decades by some combination of public revulsion against a major war, opposition to high military spending, serious concern about the budget deficit, and a change in perception of the external threat. Today, the permanent war state faces the first three of those dangers to its power simultaneously – and in a larger context of the worst economic crisis since the Great Depression....."
Posted by Tony at 6:27 AM