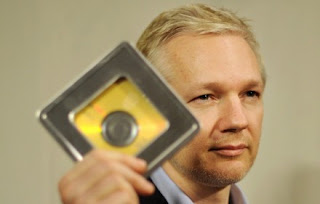 Julian Assange became enemy number one by bringing truth to light. Yet WikiLeaks is unquelled, playing a role that mainstream media are too tired to handle. The whistleblower is in conversation with John Pilger.

"The attacks on WikiLeaks and its founder, Julian Assange, are a response to an information revolution that threatens old power orders, in politics and in journalism. The incitement to murder trumpeted by public figures in the United States, together with attempts by the Obama administration to corrupt the law and send Assange to a hell-hole prison for the rest of his life, are the reactions of a rapacious system exposed as never before.....

Crushing individuals such as Julian Assange and Bradley Manning is not difficult for a great power, however craven. The point is, we should not allow it to happen, which means those of us meant to keep the record straight should not collaborate in any way. Transparency and in­formation, to paraphrase Thomas Jefferson, are the "currency" of democratic freedom. "Every news organisation," a leading American constitutional lawyer told me, "should recognise that Julian Assange is one of them, and that his prosecution will have a huge and chilling effect on journalism."

My favourite secret document - leaked by WikiLeaks, of course - is from the Ministry of Defence in London. It describes journalists who serve the public without fear or favour as "subversive" and as "threats". Such a badge of honour."
Posted by Tony at 4:19 AM