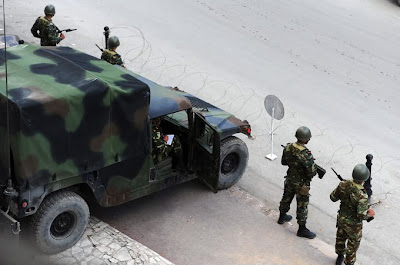 As revolutionary zeal engulfs the region, the people must be on their guard against the forces seeking to smother it.

".....Do not underestimate the psychological impact of what Tunisians have just achieved. Arab regimes have had a free hand at imposing their will on reluctant populations through the use of a single instrument: Fear. In the space of just a few weeks, masses of Tunisians have demonstrated to the Arab region the limits of dictatorial rule.....

As the former colonial overlord in Tunisia, France has a history of deceit, mendacity and, to boot, hypocrisy in relation to North Africa. How often are the French wont to proclaim liberté, égalité, fraternité as their most fundamental values? As far as French policy in North Africa is concerned, we may add another: Fallacy.

The Tunisian despot's closeness to France was legendary. Despite achieving independence from France, Tunisia remained subject to its puppet master's whims under its dictatorial regime.
Something of a similar revolution spread across Algeria some two decades ago. Back then, with the avowed backing of the French state, Algerian security forces trampled over Algerian democracy precipitating a brutal civil war.

For Tunisia's revolution not to be short-lived, the population will need to be alert to the behind-the-scenes machinations and manoeuvrings of the French.

That France refused refuge to the deposed despot was not a sign of the former's solidarity with the Tunisian people. Rather a play at real politik by the French and a little forward thinking in how best to influence future events in Tunisia.

If a new system beckons in Tunisia, the people would do well to distance themselves from France.

The Arab world has had little cause for celebration of late. At the mercy of long-standing kingdoms and hereditary life-time autocrats, political suffocation has been the order of the day. Defeatism had taken hold over civil society. But the momentous events in Tunisia show how no amount of bloodletting will kill peoples' spirit.

Platitudes from foreign powers are unnecessary now. The people of the Middle East are capable of building their own futures as they see fit.

Despite such optimism, however, do not be surprised if the new revolutionary zeal is buried prematurely given what it may mean for Western policy.

The tide of defiance will not easily be pushed back. That is not to say there will not be many forces out there employing all means necessary to smother it. Tunisians and Arabs are only at the very early stages of their struggle for freedom and must be on their guard against the difficult obstacles ahead."
Posted by Tony at 3:54 AM