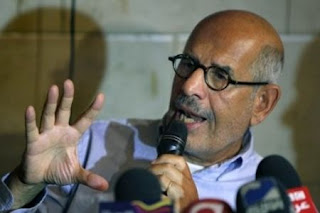 Mohamed ElBaradei says Egyptians 'yearning for change', but draws criticism for refusing to back street-level protests

"The Egyptian dissident Mohamed ElBaradei has warned of a "Tunisia-style explosion" in his country as self-immolation protests proliferated and anti-government activists announced plans for a nationwide "day of anger" next week.

But the former UN nuclear weapons chief stopped short of calling on his supporters to take to the streets, prompting scathing criticism from opposition campaigners who believe ElBaradei is squandering a rare opportunity to bring an end to President Hosni Mubarak's three decades of autocratic rule......

Yet on the heels of six reported incidents of self-immolation and large anti-government demonstrations planned for next week, ElBaradei refused to throw his weight behind street-level protests, instead expressing concern at the "general state of instability" engulfing the country.

"These things need to be organised and planned properly," said the 68-year-old. "I would like to use the means available from within the system to effect change [What a cop out!], such as the petition we are gathering demanding political reform......."I still hope that change will come in an orderly way and not through the Tunisian model," he added........
Grassroots activists accused ElBaradei of timidity. "From day one ElBaradei has proved himself not to be a man of the street," said Hossam El-Hamalawy, a prominent journalist and blogger. "He comes from a diplomatic background and the kind of change he wants is peaceful and gradual, something that will not shake the foundations of the establishment. But unfortunately for him the Egyptian people have far more radical demands than the ones he is articulating: this is not just about creating a clean parliament and a fair presidency, it's about the daily bread and butter of the Egyptian people." 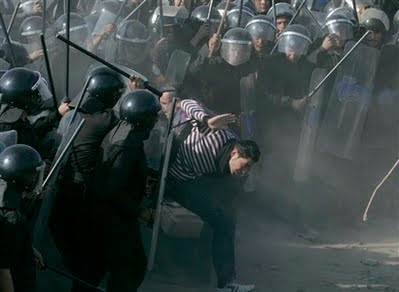 Opposition groups are planning a series of national protests next Tuesday, coinciding with a public holiday designed to celebrate the achievements of the police force – an institution that has galvanised popular anger against the state in recent months after high-profile police torture allegations and the deaths of several Egyptians in police custody.

"We hope it will be big, very big" said Ahmed Salah, one of the organisers. "Whether it will provide the spark that brings down the regime we simply don't know. But I think the most exciting thing about events in Tunisia is that we've seen that when people move, they move for democracy – not for religion, not for elite interests, not for private loyalties. It shows the choice that we're always being presented with in Egypt by Mubarak and the west – a choice between Mubarak's oppression or religious fundamentalism – is a false one." ......

"Egypt, on the other hand, is the second largest recipient of US aid and is a pro-American pillar in the region. The US can afford to lose Tunisia. But Egypt is a different story. The Obama administration won't take too kindly to the idea of losing Egypt to the opposition, particularly when that opposition is likely to include the Muslim Brotherhood.""
Posted by Tony at 3:55 AM