The real scandal is Blair's ignorance 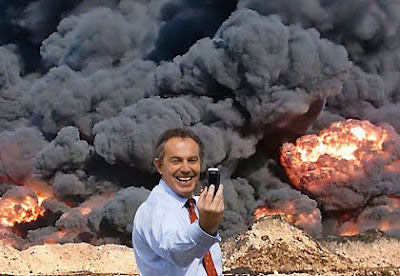 Worth watching will be the extent to which he continues his tirades against Iran, in much the same way as he spoke of Iraq

".......But even more damning and more destructive than what he did before the war was Mr Blair's failure to learn much about the country after the invasion. Going by his evidence, he seems to think, as well as speak, in slogans. In his evidence he lost no opportunity to blame the Iranian hidden hand for destabilising Iraq and backing al-Qa'ida.

This may go down well when Mr Blair talks to paranoid Sunni rulers in the Gulf or audiences of neo-cons in the US, but very little of it is true. Iran was never likely to give much support to al-Qa'ida, which was more intent on slaughtering Shia in Iraq than killing Americans.

The former British ambassador to Iran, Sir Richard Dalton, told the inquiry in little noticed but fascinating testimony that Mr Blair's claims were all "very much exaggerated". He warned that Mr Blair was seeking "to cast a retrospectively benign light on a series of very bad decisions" and, by justifying what was done in Iraq in the past, to open the door to an attack on Iran in future.

Worth watching today will be the extent to which Mr Blair continues his tirades against Iran, misrepresenting the country and its leaders as an imminent threat in much the same way as he spoke of Iraq in the lead-up to the invasion. Sir Richard told the inquiry that he felt that "a military adventure against Iran" would be as illegal and unjustified as the one launched against Iraq....."
Posted by Tony at 4:11 AM