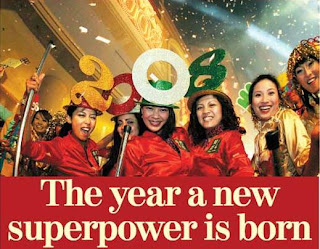 "Here comes the world's newest superpower. The rest of the world is gloomily contemplating economic slowdown and even recession. Not in Beijing. China is set to make 2008 the year it asserts its status as a global colossus by flexing frightening economic muscle on international markets, enjoying unprecedented levels of domestic consumption and showcasing itself to a watching world with a glittering £20bn Olympic Games.

The world's most populous nation will mark the next 12 months with a coming-of-age party that will confirm its transformation in three decades from one of the poorest countries of the 20th century into the globe's third-largest economy, its hungriest (and most polluting) consumer and the engine room of economic growth......"
Posted by Tony at 6:03 AM