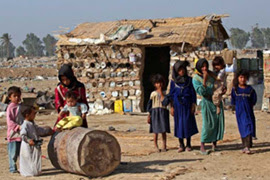 "Abu Muhammad, a Baghdad resident, found it difficult to let go of his daughter's hand but he had already convinced himself that selling her to a family outside Iraq would provide her with a better future.....

By mid-2007, conditions for his family had become desperate and his children, once healthy and bubbling with life, had become gaunt and lethargic.

It was then that a translator and a Swedish couple claiming to be part of an international NGO arrived in the makeshift refugee camp.

"They heard about my situation and the woman, who said she could not have babies, offered some money to give her my youngest daughter of two years old," he said.

"I refused in the beginning but the Iraqi translator was constantly coming at the camp and insisting with the same question. One day I found that my children would die without food and a clean environment and the next time he came to my tent, I told him that I agreed."......

Local officials and aid workers have expressed concern over the alarming rate at which children are disappearing countrywide in Iraq's current unstable environment.

Omar Khalif, vice-president of the Iraqi Families Association, (IFA), a NGO established in 2004 to register cases of those missing and trafficked, said that at least two children are sold by their parents every week.