PCAS: Children of Gaza go on a rally calling for peace and ending siege! 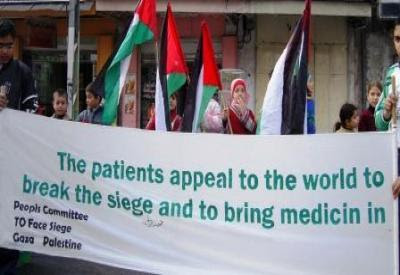 "Gaza Strip, January, 1, 2008, (PCAS) - Part of the endless activities organized by Popular Committee against sieges (PCAS), the committee organized a rally for besieged children in Gaza Strip. Hundreds of children participated in the rally which took place in Gaza city with massive media coverage.
The Protesters (children) formed a human chain in Omar Al Mokhtar street, the largest street in Gaza city for almost two hours. Protesters call upon ending Gaza Siege which affects their lives in every single way.

PCAS chairman, member of Palestinian Parliament Jamal Naji El Koudary alongside members and volunteers of PCAS participated in the event.

Chairman El Khoudary asserted that children have the right to live far from conflicts and political problems. He added that siege imposed on Gaza affected all life aspects for the past 7 months, with no interference from Arab or Islamic countries or International ones as well.

El Khoudary said about this rally, "occupation is killing innocent Palestinian children day by day in all ways. Children are here today to tell the world we are being killed and you are completely silent. Children must be protected in all times and this is a guaranteed right by all humanitarian charters."

Mr. Chairman touched upon the ongoing deadly health crisis in Gaza Strip asserting that it must come to an end. "Patients are in same situation; their health status is on continuous retreat. About 56 died and other poor patients are waiting their inevitable death as they are in the death Blacklist set by Israeli occupation.

"On behalf of oppressed besieged Gazans, PCAS calls upon the free world to lift the tight illegitimate siege. This siege threatens lives of all Gaza residents. It's flagrant and obvious violation for all humanitarian charters and conventions.

PCAS met some of children who said, "We need to play and to get fun like other children around the world. Why we are besieged? We didn't commit any mistake?"

The 7-year-old Hend started to cry when we tried to speak to her, "All I need is to see my father back in Gaza, he is trapped in Egypt and not able to get into Gaza as crossings are closed."

It's remarkable that PCAS is running extensive activities against siege. Yesterday there was a very crucial joint press conference hold by El Khoudary and Pastor Manuel Musalam, leader of Latin sect in Gaza. They both sent a message to the Pope to end Gaza Siege.

freegaza.ps@gmail.com"
Posted by Tony at 2:09 PM