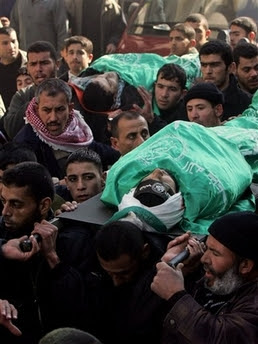 The Continued Stupidity of Palestinian Fighters is Alive and Well....

A RESPONSE TO UPROATED PALESTINIAN

One definition of insanity is doing the same thing over and over, but expecting different results. By that definition, a certain amount of insanity is apparent in the leadership of the resistance.

What is it going to take for them to learn? By the dozen and half dozen, the IOF is killing them as if it were shooting pigeons!

Fixed positions?? The rhetoric says it all: They were "murabitun!" Say what?? Murabitun!! "Defending Palestine!"

This is empty and stupid talk, not indicative of an intelligent leadership that can learn and adapt. They are putting these poor 20-year olds in fixed positions to be spotted and mowed down! This is a crime committed by their commanders.

Unless I see a change indicative of learning, I am afraid that the IOF will keep eliminating the resistance with hardly any cost to it, by using air power.

I am sorry to say, but we are facing an enemy that is proving to be smarter than us. No amount of empty rhetoric and bravado will change that.
Posted by Tony at 7:50 AM