A bloody message from Iraq: nowhere is safe... 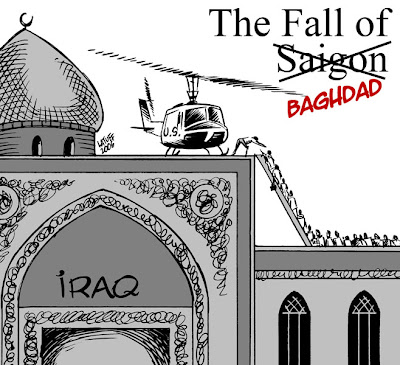 "Nowhere is safe. Insurgents struck in the heart of the Green Zone yesterday, one of the most heavily defended places in Baghdad. The symbolism - and the bloody message - was clear with this attack on the home to the US-imposed democracy.

A suicide bomber cleared at least eight rings of security to blow himself up in the Iraqi parliament, killing eight people including three lawmakers as they were eating lunch. It was the most deadly attack mounted from within the Green Zone.

In a separate attack, the Iraqi capital was cut in two as one of the main bridges over the Tigris was blown up earlier in the day.

The Green Zone bombing was not only an assault on democracy. It was intended to undermine President George Bush's troop "surge", which is denounced as a sham by so many Iraqis......

The bombing is likely to increase scepticism that the two-month old American campaign to get control of Baghdad, the "surge", is achieving very much.

The suicide bombing is one of the most dramatic demonstrations of the extent to which the Sunni insurgents have infiltrated the government's own security apparatus. Other recent examples include the serious wounding of the deputy prime minister Salam al-Zubaie on 23 March by a bomber who got near him with the connivance of his own bodyguards......

The sensitivity of the US and the Iraqi government to the breach in security was apparent because all television cameras and video tapes showing the immediate aftermath of the blast were confiscated and handed to US authorities.......

Of the three members of parliament to die, two were from Sunni parties and one from the Shia alliance. Khalaf al-Ilyan, one of the leaders of the Iraqi Accordance Front, said the explosion "underlines the failure of the government security plan."

"The plan is 100 per cent a failure," said Mr al-Ilyan. "It's a complete flop. The explosion means instability and the lack of security has reached the Green Zone, which the government boasts is heavily fortified.".....

The US is gradually increasing its forces to 173,000 by sending in five new brigades as part of the new security plan. But there is little sign the additional troops are altering the political and military balance in Iraq. The Sunni rebellion is continuing and is still highly effective....."
Posted by Tony at 8:14 PM