Record of Iraq War Lies to Air April 25 on PBS 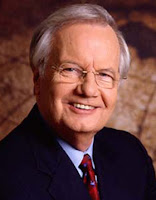 "Bill Moyers has put together an amazing 90-minute video documenting the lies that the Bush administration told to sell the Iraq War to the American public, with a special focus on how the media led the charge. I've watched an advance copy and read a transcript, and the most important thing I can say about it is: Watch PBS from 9 to 10:30 p.m. on Wednesday, April 25. Spending that 90 minutes on this will actually save you time, because you'll never watch television news again – not even on PBS, which comes in for its share of criticism.

While a great many pundits, not to mention presidents, look remarkably stupid or dishonest in the four-year-old clips included in "Buying the War," it's hard to take any spiteful pleasure in holding them to account, and not just because the killing and dying they facilitated is ongoing, but also because of what this video reveals about the mindset of members of the DC media. Moyers interviews media personalities, including Dan Rather, who clearly both understand what the media did wrong and are unable to really see it as having been wrong or avoidable.

It's great to see an American media outlet tell this story so well, but it leads one to ask: When will Congress tell it? While the Democrats were in the minority, they clamored for hearings and investigations, they pushed Resolutions of Inquiry into the White House Iraq Group and the Downing Street Minutes. Now, in the majority, they've gone largely silent. The chief exception is the House Judiciary Committee's effort to question Condoleezza Rice next week about the forged Niger documents......"
Posted by Tony at 8:38 AM