MK Bishara set to declare he quits from Knesset 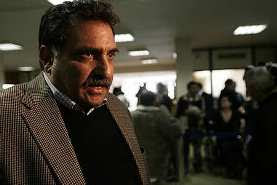 "MK Azmi Bishara, chairman of the Arab Balad party, intends to announce his resignation from the Knesset while he is out of the country, Haaretz learned on Sunday.

Bishara is expected to make the announcement on a television interview from his present location in Amman, Jordan. Bishara will also send his letter of resignation to Knesset Speaker Dalia Itzik following the Passover recess, later in the week.

The Balad chairman left Israel two weeks ago. He initially left for Qatar to serve as commentator for the Aljazeera TV network during the Arab Summit in Riyadh. He then flew to Amman, in order to promote the release of his latest novel. He plans to announce his resignation from Amman, and it is unclear when he intends to return to Israel.

Senior Balad officials stressed to Haaretz on Sunday that the resignation will be confirmed only if Bishara does in fact make the announcement......."

In a statement distributed today, the NDA said, " the news published in the media are false, because if there was such an intention, the party would have reported it."......"
Posted by Tony at 10:11 AM