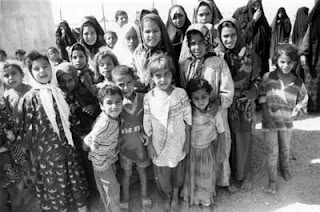 "DAMASCUS - Salim Hamad, 33, glances at the sprawling buildings of the Yarmouk refugee camp in Damascus and sees business. He has set up a small tea shop at the camp.

"I left everything behind," he told IPS. "I have no idea what became of my house."

Salim, a railways worker in Baghdad, sold his car and furniture to raise money to bring his wife and three children to Damascus five months ago. Syria it had to be, because by then Jordan's government was no longer letting in men his age......

Yarmouk refugee camp, on the outskirts of Damascus, has long been home to more than 100,000 Palestinian refugees. It is a set of tall apartment buildings separated by small alleys stuffed with shops.

It is one of the better refugee camps. Most refugees have running water, electricity, and other basic services.

Now tens of thousands of Iraqis have flooded into Yarmouk. The exact number is unknown......

"We had 11 engineers from one company detained by the Mahdi Army [the militia of Shia cleric Moqtada al-Sadr]," he said. "We never heard from them again. I knew then that I had to drop everything and run for my life."

Ali does not see himself returning soon. "I don't expect to go back for at least 15-20 years. I have left everything behind, and now I have nothing but a small food store I run here. But it is not enough. Not the UN, nor any government, least of all the Iraqi government, is doing enough to help us."....."
Posted by Tony at 5:24 AM