Syria, Elliot Abrams, and the Contras All Over Again 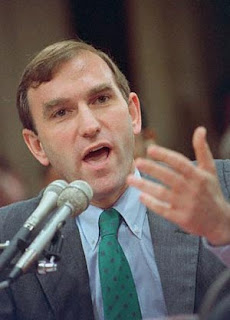 ".......Unlike his high-public profile as assistant secretary 20 years ago, Abrams, who now presides over Middle East policy at the National Security Council, is today far more discreet, no doubt in part because his conviction in 1991 for lying to Congress about his role in the Iran-contra scandal has made him an easy target for Democrats.

But there is little doubt among Middle East analysts here that Abrams is playing a lead role in White House efforts to discredit Pelosi for meeting with Assad, just as he did with Wright for meeting Ortega in 1987.

And just as he worked with Reagan hard-liners to undermine the Arias Plan 20 years ago, so he appears to be doing what he can to undermine recent efforts by Saudi King Abdullah to initiate an Arab-Israeli peace process and, for that matter, by Republican realists, and even Secretary of State Condoleezza Rice, to push it forward."
Posted by Tony at 5:40 AM