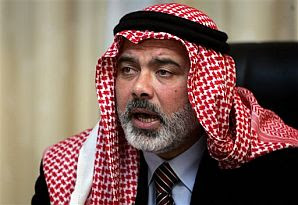 ".....According to the defense establishment's current assessment of Hamas, the movement has split into three central groups, the first led by Khaled Mashaal, the exiled political leader based in Damascus. Mashaal, a senior defense official noted Wednesday, recently made a strategic decision to "lower his profile" as part of an effort to disguise himself as a moderate.

"Mashaal's ultimate goal is to take over the Palestine Liberation Organization (PLO) and become the next Yasser Arafat and become the supreme Palestinian leader," the official said. The official added that Mashaal's attempt to turn into a pragmatist was part of a "devious plot" and that he had not really abandoned his radical anti-Israel views.

The second group is spearheading the revolt within the movement and is led by former interior minister Said Siam, former foreign minister Mahmoud Zahar and former Hamas spokesman Sami Abu Zuhri. The three enjoy the backing of many Hamas activists in the Gaza Strip, including members of Hamas's armed wing, Izaddin Kassam.

The "rejectionists" - as they are called - accuse Hamas Prime Minister Ismail Haniyeh and Mashaal of betraying Hamas voters by agreeing to form a coalition with Fatah. They argue that the Mecca agreement is nothing but a plot designed to remove Hamas from power. Both Siam and Zahar have privately criticized Haniyeh as well as Mashaal for signing the agreement.

The rejectionists are also worried that to retain their positions, Haniyeh and Mashaal are prepared to sacrifice Hamas's ideology. For them, the political platform of the new coalition, which accepts the Arab peace plan of 2002 and UN resolutions regarding the Israeli-Arab conflict, is an indication that Hamas has abandoned its radical ideology.

"Their major fear is that Hamas will do what the PLO did in 1993, when it recognized the two-state solution and launched peace talks with Israel," said one of Haniyeh's top aides. "The unity government has created many problems among the leaders of Hamas, but we hope that this will not lead to a split.".....

The third group in Hamas is the most radical and is believed by Israel to be behind the drafting of the list of prisoners who the Palestinians have demanded be released in exchange for Schalit. This group is based in the Gaza Strip and is led by Ahmed Jaabri - the Hamas "Chief of Staff" in Gaza - believed to have directed and carried out Schalit's abduction in June.

"There is a split inside Hamas," Fatah legislator Jamal Tirawi, who represents the Nablus district in the Palestinian Legislative Council, said. "Siam, Zahar and Abu Zuhri represent the radical trend, while Haniyeh and Mashaal belong to the moderate side."......"

Well, it appears that we have not one, but two Habilas. Double celebration is called for, no?
Posted by Tony at 8:34 PM