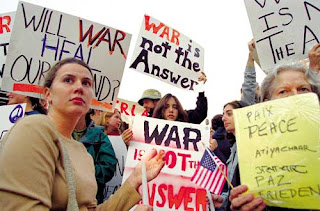 "The news I have for "netroots" types and Huffington Post liberals who see the Democratic Party as the major if not only hope for the antiwar movement can be summed up in two words: forget it. Majority leader Sen. Harry Reid recently let the cat out of the bag when he said, "There is new reason this week to believe that a bipartisan consensus on Iraq is emerging."

Translation: the sellout is coming, if it isn't already here......

The cure is not to be found in partisan politics or in the wishful thinking of Hollywood liberals who invest their hopes in whatever rising star in the Democratic political firmament is fashionable at the moment. The only antidote is a third-party effort to expose and defeat both wings of the War Party and hold them to account. A nationwide antiwar electoral campaign pledged to defeat all pro-war members of Congress – especially Democrats– and actively campaign against all pro-war candidates for president would do much to set the stage for a complete cure.

Before that is possible, however, grassroots activists must lose their illusions about the Democratic Party – and recognize the necessity of defeating pro-war Democrats, not just in primaries but in the general election. The third-party option must be considered, and this will separate those whose first loyalty is to the Democrats from those whose allegiance is to the cause of peace.

Let's separate the wheat from the chaff, the "benchmarks" from the bullsh*t, and the partisan hacks from the healthy body of the antiwar movement. Because ending this war isn't a partisan issue – it's a moral imperative. "
Posted by Tony at 7:27 AM