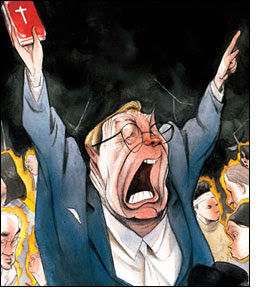 "Calling the ding-a-lings together, Bush sketched out the “existential threat to the United States from a nuclear Iran,” as Max Blumenthal explains it. “I was invited to go to Washington DC to meet with President Bush in the White House along with 12 or 13 other leaders of the pro-family movement,” James Dobson, chairman of the board of Focus on the Family, told his radio audience. “I heard about this danger [from Iran] not only at the White House but from other pro-family leaders that I met during that week in Washington,” he said. “Many people in a position to know are talking about the possibility of losing a city to nuclear or biological or chemical attack. And if we can lose one we can lose ten.”

I’m experiencing that old déjà vu feeling again. Iraq has nukes or biologicals. Saddam is Hitler. Saddam and al-Qaeda will unleash a fury against the United States. Kindergarten children and old ladies will suffer and die. We have to do something. We have to mass murder a whole lot of people. Turn the place into a glass parking lot......

Naturally, all of this nonsense works dandy for the neocons, determined to attack not only Iran but Syria and in fact undermine the whole of the Muslim Middle East. If it takes absurd radio broadcasts by fanatical Christian Zionists and prophesy-reading novelists to push their mass murder message, so be it.

In the demented realm of Bushzarro world, where up is down and black is white, it is all good. "
Posted by Tony at 8:01 AM