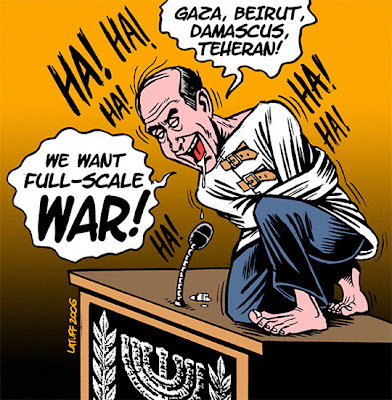 Now, after the first excitement caused by the publication of the partial report has died down, it is possible to evaluate it. The conclusion is that it has done much more harm than good......

Strong medicine. What is the conclusion? That we must learn these lessons and improve our performance quickly, before we start the next war.

And indeed, a large part of the public drew precisely this conclusion: the three "ineptocrats" have to be removed, their place has to be filled by three leaders who are more responsible and "experienced", and we should then start Lebanon War III, so as to repair the damage caused by Lebanon War II.

The army has lost its deterrent power? We shall get it back in the next war. There was no successful ground attack? We shall do better next time. In the next war, we shall penetrate deeper.

The entire problem is technical. New leaders with military experience, orderly staff-work, meticulous preparations, an army chief from the ranks of the ground forces instead of a flying commander - and then everything will be OK.

THE MOST important part of the report is the one that is not there. The report is full of holes, like the proverbial Swiss cheese.

There is no mention of the fact that this was from the start a superfluous, senseless and hopeless war......

A CONSPICUOUS hole in the report concerns the international background of the war.

George Bush had an interest in this war. He was (and is) stuck in the Iraqi morass. He is trying to put the blame on Syria. Therefore he wanted to strike a blow against Damascus. He also wanted to break the Lebanese opposition, in order to help America's proxy in Beirut. He was sure that it would be a cakewalk for the Israeli army.

When the expected victory was late in coming, American diplomacy did everything possible to prevent a cease-fire, so as to "give time" to the Israeli army to win. That was done almost openly.

How much did the Americans dictate to Olmert the decision to start the war, to bomb Lebanon (but not the infrastructure of the Siniora government), to prolong the war and to start a ground offensive at the last moment? We don't know. Perhaps the committee dealt with this in the secret part of the report. But without this information it is impossible to understand what happened, and therefore the report is to a large extent worthless for understanding the war......"
Posted by Tony at 10:47 AM