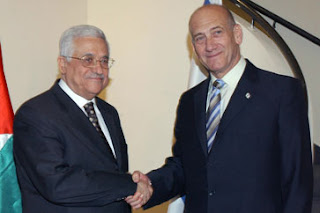 ".......A senior Israeli officer commented Thursday: “The fire burning in Sderot and Gaza could spread suddenly to Lebanon or Syria.”.....

In sum, the two heads of Hamas’ military wing are determined to topple by force of arms and hundreds of Qassam missiles the Palestinian strategies pursued by the US, Europe, Saudi Arabia, the Middle East Quartet and Israel.....

If Abbas’ forces, in which the US has invested hundreds of millions of dollars and high hopes for a Palestinian future, were to go into battle, the IDF could strike Hamas from the rear to halt the missile offensive on its own account, without becoming a party to the factional conflict. But as long as Abu Mazen keeps his men on the sidelines, Israeli leaders are stuck with their second decision in 11 months about whether or not to go to war against an aggressor.

In the hope of luring Abbas’ men into battle against Hamas, the Israeli Air Force was ordered early Friday, May 18, to help the Palestinian Presidential Guard’s 4th Battalion guarding the Karni goods crossing from Israel by striking a Hamas unit poised to seize the border facility. This was the first time Israel stepped into the Hamas-Fatah conflict. If it fails to draw Abbas’ men into the fray, Israel could risk being forced to challenge the Hamas missile masterminds alone - and be unwillingly drawn into the factional dispute on Abu Mazen’s behalf.

That is not the only dilemma facing Olmert.

If he holds the army back from a direct confrontation with Hamas, the missile offensive will develop into a war of attrition on Israel’s southwestern border. Hamas has threatened to expand its offensive to towns which are larger and more distant from Gaza’s borders than Sderot. If, on the other hand, Israel goes ahead and clobbers Hamas, it faces the multiple threats of renewed suicidal terror in its main cities and of Hizballah and Syria joining in to support Hamas.

It looks therefore as though the widely predicted Summer 2007War is already upon Israel - and it won’t be an easy one."
Posted by Tony at 4:13 AM