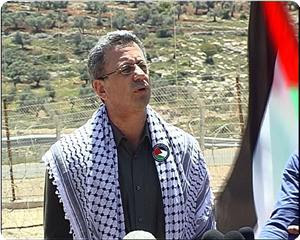 "RAMALLAH, (PIC)-- The PA information minister, Dr. Mustafa Al-Barghouthi, on Saturday urged the world community to impose sanctions on Israel to force it into halting its crimes against Palestinian civilians in the Gaza Strip.

Barghouthi described the IOF air raids and artillery shelling against densely-populated neighborhoods in Gaza as "war crimes" and "a flagrant violation of the fourth Geneva Convention".

In a press release, the minister said that it was imperative on the international community to act so as to check the Israeli bloody attacks, which he said came as a practical response to the Arab peace initiative and in a bid to block any opportunity for peace based on justice.

Israel killed more than 50 Palestinians mostly women and children ever since the PA national unity government was formed more than two months ago while no Israeli was killed in that same period, Barghouthi pointed out.

He refuted Israel's allegation that the raids were aimed at stopping the firing of Palestinian resistance missiles, explaining that if the Israeli government really wished an end to the firing of those missiles it should have accepted the Palestinian offer of a comprehensive and reciprocal calm.

The minister said that the real aim of the current Israeli escalation is to cover up for the weakness of that government, which clearly displays the absence of any peace partner on the Israeli side.

He finally charged that the Israeli government was waging a brutal war against the Gaza Strip that did not spare civilians or infrastructure in a manner revealing the intent on destroying Palestinian life."
Posted by Tony at 1:46 PM