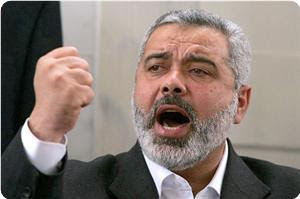 Sneh: Haneyya is an assassination target for Israel

In an interview with the Hebrew radio Tuesday, Sneh affirmed, “PA premier Ismael Haneyya could be killed by the IOF troops in the framework of the Israeli retaliation to Palestinian missile attacks by Hamas”.

When asked on whether or not Haneyya was placed on Israel’s hit-list, Sneh retorted, “I'll put it like this, there is no one who is in the circle of commanders and leaders in Hamas who is immune from a strike”.

“Mishaal isn’t immune of Israeli strikes and we will get him in the first available chance” said Dichter.

Hamas’ political leader had repeatedly affirmed that they aren’t afraid of being killed as they know that they are dying for the cause of a noble and just issue that is the Palestinian issue."
Posted by Tony at 4:37 AM