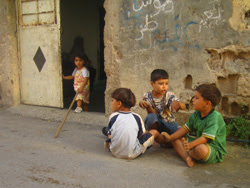 "BEIRUT, 20 May 2007 (IRIN) - Hundreds of thousands of Palestinians in refugee camps across Lebanon could face an economic crisis, warned analysts, after 11 Lebanese Army soldiers were killed in heavy clashes with Islamist militants based in Nahr al-Bared camp near the northern city of Tripoli.

In what observers say is the worst fighting to hit Tripoli in two decades, army tanks opened fire on positions inside Nahr al-Bared camp held by militants from Fatah Islam, a Sunni al-Qaeda-styled group. The group’s presence spurred the army to close public access to the camp earlier this year, devastating local incomes.

After suffering its heaviest losses in many years, security analysts predict the Lebanese army may increase its military presence around all Palestinian refugee camps, home to over half of Lebanon's more than 400,000 Palestinian refugees, further limiting public access and damaging an already fragile economic and social environment.

"The Lebanese army will be shocked by this as they have not normally considered themselves a target for attack," Timor Goksel, a former United Nations Interim Force in Lebanon (UNIFIL) spokesman and long-time Lebanon security analyst, told IRIN.

"The army plays a very important internal security function and they will now need to restore their credibility. The army might consider putting camps across Lebanon under a similar kind of siege and all Palestinians could suffer. There might be more bloodshed," he added.

Under a decades-old agreement with Lebanon, internal security in the camps is left to the Palestinians, predominantly the Fatah party, which is the largest faction and a secular rival to the less popular Fatah Islam........"
Posted by Tony at 5:48 AM