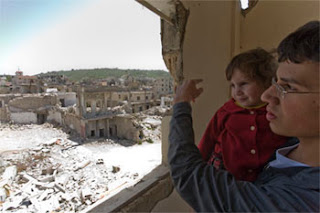 "“We rely on Hezbollah and these other countries which are helping us now because it’s all we have,” Abu Khalil, an unemployed construction worker injured by bomb shrapnel during last summer’s war in Lebanon, told me. As we stood talking in the warm spring sun outside his largely destroyed village of Aita Ech Chaab, a few hundred yards from Lebanon’s southern border, he added, “And we rely on Hezbollah to protect us again from the next Israeli aggression, because our own government cannot and will not do that job.”

In its savage 34-day assault on Lebanon, the Israeli government had hoped to knock down precisely that sentiment. One of the stated aims of the war, in which more than a thousand Lebanese and more than 40 Israelis were killed, was to turn the Lebanese against Hezbollah for having triggered the conflict. An ironic assumption considering that the creation of Hezbollah was a direct response to an earlier Israeli attack......

Another irony is that nearly half the members of the massive opposition alliance joining Hezbollah against the U.S.-backed Lebanese government are Christians.....

Last summer, Israeli Justice Minister Haim Ramon announced on Israeli army radio that “all those in south Lebanon are terrorists who are related in some way to Hezbollah” and “villages should be flattened by the Israeli air force before ground troops move in.”

Such rhetoric and the ensuing actions have not had the effect desired by the U.S. and Israel. Instead of becoming unpopular, Hezbollah has garnered massive political alliances......"
Posted by Tony at 10:40 AM