Guardian at the Gates: Surging Toward War With Iran 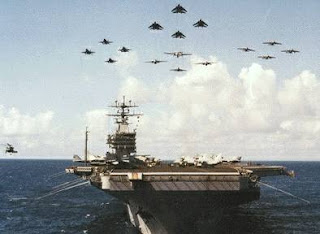 "If you have any doubt that the Bush Administration is planning a military strike against Iran, then check out the lead story in today's Guardian: Iran's secret plan for summer offensive to force US out of Iraq. The story, which is based entirely -- entirely -- on the unchallenged statements of three anonymous "American officials," not only alleges that Iran is "already committing daily acts of war against US and British forces" -- including the increasing mortar attacks on the Green Zone -- but also asserts that Tehran has entered into an active military alliance with al-Qaeda. Together, this new axis of evil will launch a "nationwide, Iranian-orchestrated summer offensive" aimed at undermining the scheduled September progress report from U.S. General David Petraeus on the vaunted "surge." Oh, and to top it all off, the same officials told the Guardian's stenographer, Simon Tisdall, that Iran has now also allied itself with its long-time enemy, the Taliban, and are helping kill Americans in Afghanistan as well.

To reiterate: the claim now from "top Bush officials" is that Iran has entered into an alliance with al Qaeda and is "committing daily acts of war" against American forces. As a casus belli, this beats the hell out of an "imminent threat" from undiscovered WMD, the entirely specious charge used by the Bush Faction to gull the nation into aggressive war with Iraq. In fact, at the time of that invasion, no Iraqi had killed an American in the 12 years since the first Gulf War; but here, we have the Bushists claiming that Iranians are killing Americans right this very minute -- every single day.

The clincher is the new charge that the Iranians are now actively allied with al Qaeda. It is by now a well-worn modus operandi of the Bush Terror Warriors simply to declare that anyone they don't like -- anyone who is a candidate for what Bush calls "the path of action" -- is an ally of al Qaeda. This is what was done in the last Terror War "regime change" aggression, in Somalia. And of course, this is what was done in the build-up to the Iraq invasion. At every turn, Bush explicitly equated the conflict with Saddam with the "war on terror," i.e., the fight against al Qaeda.......

Looking at the story on-line -- as Cole did, presumably, and as will the vast majority of American readers -- does not convey the lurid setting that the Guardian's print edition gives to the story. From every newsstand in Britain, you can see the large, double-decked banner headlines screaming of Iran's plans for a summer offensive -- with no quote marks, no qualifications, just a bald statement of fact. The headlines stream across the page underneath a full-length picture of a smoldering Bradley armored car that has just been destroyed by a roadside bomb. (Supplied -- or even planted! -- by those dastardly Iranians, no doubt.) In terms of its visuals, and the unsubtle message conveyed to passers-by and casual readers by the headlines and photo, the Guardian piece is a far more garish and effective piece of propaganda than any pre-Iraq War story that appeared in the staid New York Times.

So we should not be surprised to see the Guardian story blowing back across the water to be milked by the Administration and its many outside agitators for another act of aggression. But beyond its utility as a bloody shirt, the story is also important for the insight it provides on how the Bushists are laying the groundwork for the attack on Iran -- and how far along they are in the warmongering campaign. If we have already gotten to the "al Qaeda alliance" stage -- the hottest of hot buttons, and one that will give ample cover to the many Democrats eager to show how bristlingly butch they are despite their lukewarm opposition to the "mishandled" Iraq war -- then the first laments of Iranian children being torn to shreds by falling bombs cannot be too far off."
Posted by Tony at 8:19 PM