Come Visit Our Reservation Campaign Endorsed by the U.S. 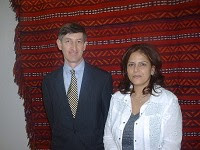 US consul meets with Palestinian tourism minister in Bethlehem, discuss the importance of tourism in promoting peace

"Bethlehem - Ma'an - The United States consul general in Jerusalem, Jack Walles, visited the West Bank city of Bethlehem on Thursday, where he was received by the Palestinian minister of tourism and antiquities, Khouloud Daibes. The consular official for economic affairs Steven O'Dowd also attended the meeting.

The Palestinian minister updated the visiting delegation on the Palestinian and regional political and economic situation. She stressed that the international community must stick to their role in assisting the Palestinian people to gain their rights and in accomplishing a just and comprehensive peace in the region [I think I am going to get sick, excuse me while I go throw up]...... "
Posted by Tony at 9:46 AM