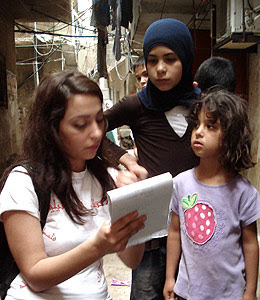 Dr. Marcy Newman, Electronic Lebanon, 26 May 2007
(Dr. Marcy Newman is a Visiting Professor at the Center for American Studies and Research at the American University of Beirut and a Fellow at the Initiative for Middle East Policy Dialogue)

"......The media in Lebanon is no better. The Lebanese army reported yesterday that only one Palestinian has died in Nahr al-Bared. In our brief mapping of the refugees from Nahr al Bared refugee camp, which is not anywhere near complete, we have found and confirmed the following people have been killed by the Lebanese army:

As the refugees continue flow into refugee camps around Lebanon, approximately 15,000 remain in Nahr al-Bared trapped for a variety of reasons. We will continue to administer aid through grassroots organizations on a house-to-house basis."
Posted by Tony at 9:15 AM