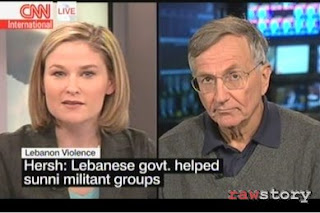 "In an interview on CNN International's Your World Today, veteran journalist Seymour Hersh explains that the current violence in Lebanon is the result of an attempt by the Lebanese government to crack down on a militant Sunni group, Fatah al-Islam, that it formerly supported.

Last March, Hersh reported that American policy in the Middle East had shifted to opposing Iran, Syria, and their Shia allies at any cost, even if it meant backing hardline Sunni jihadists.

A key element of this policy shift was an agreement among Vice President Dick Cheney, Deputy National Security Advisor Elliot Abrams, and Prince Bandar bin Sultan, the Saudi national security adviser, whereby the Saudis would covertly fund the Sunni Farah al-Islam in Lebanon as a counterweight to the Shia Hezbollah.

Hersh points out that the current situation is much like that during the conflict in Afghanistan in the 1980's – which gave rise to al Qaeda – with the same people involved in both the US and Saudi Arabia and the "same pattern" of the US using jihadists that the Saudis assure us they can control.

When asked why the administration would be acting in a way that appears to run counter to US interests, Hersh says that, since the Israelis lost to them last summer, "the fear of Hezbollah in Washington, particularly in the White House, is acute."

As a result, Hersh implies, the Bush administration is no longer acting rationally in its policy. "We're in the business of supporting the Sunnis anywhere we can against the Shia. ... "We're in the business of creating ... sectarian violence." And he describes the scheme of funding Fatah al-Islam as "a covert program we joined in with the Saudis as part of a bigger, broader program of doing everything we could to stop the spread of the Shia world, and it just simply -- it bit us in the rear."

HALA GORANI: Well, investigative journalist Seymour Hersh reported back in March that in order to defeate Hezbollah, the Lebanese government supported a Sunni militant group, the same ones they're fighting today. Seymour joins us live from Washington. Thanks for being with us. What is the source of the financing according to your reporting on these groups, such as Fatah al-Islam in these camps of Nahr el Bared, for instance? Where are they getting the money and where are they getting the arms?

SEYMOUR HERSH: The key player is the Saudis. What I was writing about was sort of a private agreement that was made between the White House, we're talking about Richard -- Dick -- Cheney and Elliott Abrams, one of the key aides in the White House, with Bandar. And the idea was to get support, covert support from the Saudis, to support various hard-line jihadists, Sunni groups, particularly in Lebanon, who would be seen in case of an actual confrontation with Hezbollah -- the Shia group in the southern Lebanon would be seen as an asset, as simple as that.

GORANI: The Senora government, in order to counter the influence of Hezbollah in Lebanon would be covertly according to your reporting funding groups like Fatah al-Islam that they're having issues with right now?

GORANI: And so if Saudi Arabia and the Senora government are doing this, whether it's unintended or not, therefore it has the United States must have something to say about it or not?

HERSH: Well, the United States was deeply involved. This was a covert operation that Bandar ran with us. Don't forget, if you remember, you know, we got into the war in Afghanistan with supporting Osama bin Laden, the mujahadin back in the late 1980s with Bandar and with people like Elliott Abrams around, the idea being that the Saudis promised us they could control -- they could control the jihadists so we spent a lot of money and time, the United States in the late 1980s using and supporting the jihadists to help us beat the Russians in Afghanistan and they turned on us. And we have the same pattern, not as if there's any lessons learned. It's the same pattern, using the Saudis again to support jihadists, Saudis assuring us they can control these various group, the groups like the one that is in contact right now in Tripoli with the government.

GORANI: Sure, but the mujahadin in the '80s was one era. Why would it be in the best interest of the United States of America right now to indirectly even if it is indirect empower these jihadi movements that are extremists that fight to the death in these Palestinian camps? Doesn't it go against the interests not only of the Senora government but also of America and Lebanon now?

HERSH: The enemy of our enemy is our friend, much AS the jihadist groups in Lebanon were also there to go after Nasrullah. Hezbollah, if you remember, last year defeated Israel, Whether the Israelis want to acknowledge it, so you have in Hezbollah, a major threat to the American -- look, the American role is very simple. Condoleezza Rice, the secretary of state, has been very articulate about it. We're in the business now of supporting the Sunnis anywhere we can against the Shia, against the Shia in Iran, against the Shia in Lebanon, that is Nasrullah. Civil war. We're in a business of treating in some places, Lebanon in particular, a sectarian violence.

GORANI: The Bush administration, of course, officials would disagree with that, so would the Senora government, openly pointing the finger at Syria, saying this is an offshoot of a Syrian group, Fatah al-Islam is, where else would it get its arms from if not Syria.

HERSH: You have to answer this question. If that's true, Syria which is close -- and criticized greatly by the Bush administration for being very close -- to Hezbollah would also be supporting groups, Salafist groups -- the logic breaks down. What it is simply is a covert program we joined in with the Saudis as part of a bigger broader program of doing everything we could to stop the spread of the Shia, the Shia world, and it bit us in the rear, as it's happened before.

GORANI: Sure, but if it doesn't make any sense for the Syrians to support them, why would it make any sense for the U.S. to indirectly, of course, to support, according to your reporting, by giving a billion dollars in aid, part of it military, to the Senora government -- and if that is dispensed in a way that that government and the U.S. is not controlling extremist groups, then indirectly the United States, according to the article you wrote, would be supporting them. So why would it be in their best interest and what should it do according to the people you've spoken to?

HERSH: You're assuming logic by the United States government. That's okay. We'll forget that one right now. Basically it's very simple. These groups are seeing -- when I was in Beirut doing interviews, I talked to officials who acknowledged the reason they were tolerating the radical jihadist groups was because they were seen as a protection against Hezbollah. The fear of Hezbollah in Washington, particularly in the White House, is acute. They just simply believe that Hassan Nasrallah is intent on waging war in America. Whether it's true or not is another question. There is a supreme overwhelming fear of Hezbollah and we do not want Hezbollah to play an active role in the government in Lebanon and that's been our policy, basically, which is support the Senora government, despite its weakness against the coalition. Not only Senora but Mr. Ahun, former military leader of Lebanon. There in a coalition that we absolutely abhor.

GORANI: All right, Seymour Hersh of "The New Yorker" magazine, thanks for joining us there and hopefully we'll be able to speak a little bit in a few months' time when those developments take shape in Lebanon and we know more. Thanks very much.