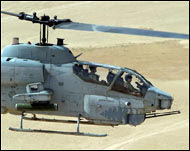 Both pilots were in stable condition after the crash, but one will be flown to a U.S. medical facility for additional treatment, according to the statement by U.S. Naval Forces Central Command. The other was expected to be released soon to return to duty.

The statement said the pilots were with the 26th Marine Expeditionary Unit, but their names were not disclosed.

The AH-1W Super Cobra helicopter was participating in exercise Infinite Moonlight, an annual exercise between U.S. and Jordanian forces, according to the military's statement. The cause of the accident is under investigation. "
Posted by Tony at 11:20 AM