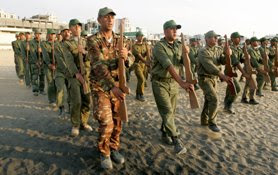 
"Israel agreed to extensive training of members of the Presidential Guard of Palestinian Authority Chairman Mahmoud Abbas in areas near Jericho, in the Jordan Valley.

The request for Israel to permit such extensive training was made through the Americans. Prior to this, Israel agreed to the transfer of thousands of rifles and ammunition to Abbas' Presidential Guard. The serial number of each weapon was registered in order to maintain at least minimal control over the weapons. On the other hand, Israel refused to approve another Presidential Guard request for the transfer of weapons of larger calibers than rifles, including heavy machine guns.

Meanwhile, in Israel, the debate still rages whether the fight for the Gaza Strip between Fatah and Hamas has been tipped in favor of the latter. Among the Israel Defense Forces, including Military Intelligence, the view is that Hamas holds the advantage in the Gaza Strip. On the basis of this view, Hamas is the leading military force in the Strip and it has the power to win the war. This is not the case in the West Bank, where Fatah has the advantage......

The assessment of the Shin Bet differs from that of the IDF. They maintain that the battle for the Gaza Strip is still not decided. Nonetheless, the Shin Bet is also not optimistic about the long-term future. This assessment will only change if there is a major revival in Fatah, and if a majority of the Palestinian public concludes that Hamas is the source of serious damage."
Posted by Tony at 8:24 PM