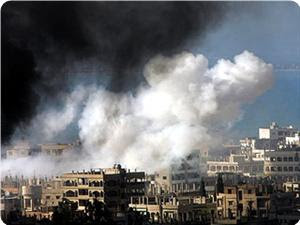 "......Al Jazeera has been told that at least 40 people have died in the camp, with sources saying that conditions are worsening.

Fathallah Deeb, head of the camp's medical centre: "We are hearing heavy bombardment... We are receiving floods of injuries into the medical centre."

"We have many reports that houses inside the camp have been totally destroyed."

He described the shelling as a massacre and appealed through Al Jazeera for international aid. He said bodies were lying uncollected under rubble......

Ghassan bin Jiddo, Al Jazeera's Beirut bureau chief, said on Monday afternoon that a Palestinian delegation had contacted the Lebanese government to bring about a ceasefire.

Georges Kettaneh, head of rescue operations for the Lebanese Red Cross, told reporters that 17 Palestinians were evacuated from the camp on Monday afternoon.

"The Red Cross established, in co-ordination with the Lebanese army and the Palestinian Red Crescent, a safe evacuation corridor which helped us evacuate 17 cases from Nahr al-Bared," he said.

He said that some food and water supplies were taken in.

However, Zeina Khodr, Al Jazeera's correspondent in Tripoli, reported late on Monday afternoon that Lebanese army shelling and gunfights around the camp had escalated.....

There are reports that water tanks in the camp have been destroyed by Lebanese army shelling.

Abu Hisham Laila, an official of the Popular Front for the Liberation of Palestine [PFLP], speaking to Al Jazeera from inside the camp, called the Lebanese bombing of the camp "indiscriminate".

"All residents have stayed at home, taking shelter in lower floors," he said.

"We want ambulances to be allowed into the camp to transfer the civilian casualties. We also want fire brigades to enter the camp and put off the fire in many buildings."

The continued fighting has led to fears that violence could flare in other Palestinian refugee camps in Lebanon.....
Posted by Tony at 11:16 AM