Cheering to the beat of the Palestinians' misery 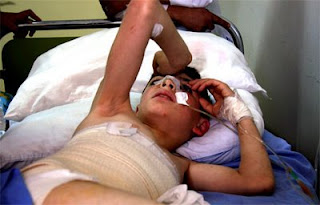 ".......What is more disturbing is that the petition, with over 10,000 signatories thus far, echoes the general mood in the country, where we have seen people take to the streets in support and celebration of the army; and where people are expressing their hatred for the Palestinian refugees by uttering such things as: "Let the army finish us from the Palestinians once and for all." In other words, the "salvation" that we are to be guaranteed of by our support of the army in this petition is a salvation from the Palestinians. In our habitual, almost instinctive resort to religious imagery, this petition claims the army as Jesus Christ and the Palestinians as all things evil.

In Lebanon we have seen this before. In the 1970s it was the Christian Phalange party among others who resorted to this language; today we are hearing it across sectarian lines. Perhaps, as proof of a lack of any moral direction, the Lebanese national narrative will once and for all be determined through the claim of a common Palestinian enemy. And I will remain disgusted!

Have those who signed the petition and who have celebrated the Lebanese army in the streets not drawn any connections between the army they are so fond of and their Zionist neighbors? In the first three days of the recent events involving the Lebanese army and Fateh el-Islam in the Nahr el-Bared camp, the Lebanese army committed what would amount to war crimes in a similar fashion to that of the Israeli army in Gaza and in Lebanon last summer, firing on a civilian population indiscriminately. When the Israelis do this, we scream at the injustice, but when the Lebanese army does it we applaud them. These are double standards.

It is sad and distressing that over 30 Lebanese soldiers have been killed as they pursue the fanatic group, Fateh al-Islam, but the blood of those soldiers is on the hands of the Lebanese government who would send them into combat without armor, training or proper intelligence. Is no one blaming the government, internal security forces or the Lebanese army itself for either their incompetence or complicity in allowing this group, which is not Palestinian, to enter the country in the first place? The onus is on the government which was responsible for overseeing the borders, and, disregarding the conspiracies of having been involved in arming this group in the first place, Fateh el-Islam could only be what it is today because certain Lebanese figures or groups allowed this to happen. Is anyone else finding it hard to believe that a militia of a few hundred fighters could form in a country the size of Lebanon, without the army or internal security's knowledge? I wonder why it is, then, that the Palestinians alone must pay the price while we cheer to the beats of their misery with utter callousness?......

I recall last summer that when Israel realized it could not successfully enter Lebanon with ground forces to fight Hizballah it decided to bomb the entire country. That summer, the country was the camp. Today Lebanon enforces Israeli military policy on a smaller scale. Rather than the annihilation of a country, what we were seeing in the Palestinian camp of Nahr el-Bared was the collective punishment of an entire civilian population through the indiscriminate use of force on a hermetically sealed camp......

Sadly, accountability does not exist in Lebanon, and thus, there will be no equivalent to the Winograd commission, no call for the prime minister to resign, and no trial of the government or those responsible for starting the current conflagration. The best way to support the army and honor the dead Lebanese soldiers is to call for an internal investigation. Anything short of that is clear proof of our society's moral bankruptcy."
Posted by Tony at 4:41 AM