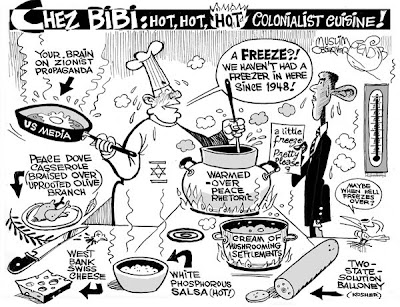 The freeze being negotiated between the US and Israel is ultimately designed to legitimise illegal Jewish settlements.

"At the beginning of his term, Barack Obama became the first US president to call for a halt in Jewish settlement construction in the Israeli occupied Palestinian territories as a prerequisite for the resumption of Israeli-Palestinian negotiations. But if a deal that stipulates a partial 90-day freeze of settlement building in return for US military and political incentives is reached, he will become the first US president to legitimise the Jewish colonies.

Palestinian negotiators have so far said that they will reject the deal - and so they should. A partial freeze would allow for the continuation of construction in occupied East Jerusalem, while the very concept of a temporary freeze is designed to give talks just enough time for an agreement allowing Israeli annexation of the biggest settlement blocs to be reached.....

But the very freeze Obama was so instrumental in pushing has now become a weapon to be used against the Palestinians - functioning merely as a tactic by which to lure Palestinians into negotiations that are designed to lead to the Israeli annexation of the land the settlements are on.

If it will ultimately lead to the legitimisation of Israeli settlements and, furthermore, the occupation, the Palestinians might just be better off without a freeze being agreed. "
Posted by Tony at 3:28 AM