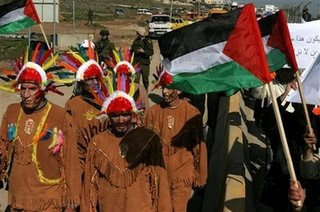 One the tragedies of thanksgiving celebration in America is the myth behind it. The pilgrims were not thanking the native Americans for teaching them how to cook a turkey and eat corn and sing kumbaya together but rather they were thanking G-d for getting rid of the natives so they did not have to deal with them, fight them, kill them or take away their land. They vanished through disease brought by the white man from Europe and the pilgrims saw that as a sign from their God that it was meant to be for them to take over this rich vast land inhabited by the savages. Every year most people celebrate the holiday without knowing the historical context or facts, liberals on the other side (Some at least) remember the tragedy and try to remind the people about what they are actually celebrating.

Hegel said "The only thing we have learned from history is that we have not learned from history" and as I sit here waiting for my Turkey and watch the Lions lose again, I am reminded that we have not learned anything from the crime perpetrated against the native people. True I can not bring them back, I can not change the past, I can not undo the native American genocide, but I know that what is happening today in Palestine is what happened to the native Americans 500 years ago.
European invaders with extreme violence and a "manifest destiny" proclamation came to a land and killed off the natives, ethnically cleansed it and occupied it.
The difference is that the Israelis cannot under daylight kill off the natives the same way the Europeans killed off the natives in America. So they have been doing it quietly and deviously: through sanctions, wars, blockades, land theft, unjust laws, uprooting trees, house demolitions, torture, water theft and deportation.
Israel is creating an environment to kill off the natives slowly (they realized there is no need to kill them, but make sure they leave Palestine and move somewhere else because living in Palestine will mean a slow death and a place with no future or potential for prosperity and a good life.) So we cannot undo the injustice done to Native Americans but we are all witnesses to the injustice being done to Palestinians since 1948 and we can no longer stay silent and pretend it is not happening.
We MUST prevent the tragedy from continuing by supporting BDS and boycott Israel as long as it is determined to act inhumanely toward the people they stole their land from. By supporting every person who stands in solidarity with the natives and tries to expose the injustice done to them. By making sure that 100 years from now Israel will not celebrate their "thanksgiving" where they claim the natives welcomed them and taught them how to make Humus and Falafel.
Let try to celebrate thanksgiving by doing all we can so the tragedy of the native Americans can not be repeated to Palestinians, and that both Palestinians and Israelis can live together in a non racist non Zionist state with equal rights and justice for all in Palestine.
Posted by Zarathustra at 12:52 PM