Look Who Was At The ATFP Gala Last Month 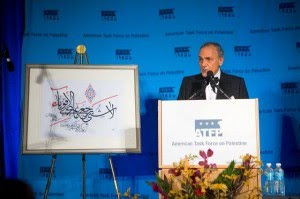 "....Just as Turki does not represent anyone other than his family (or some members of his family given the divisions, infighting, and rivalry among the Saudis), and the unelected, illegitimate Saudi regime does not represent the Arab world, the ATFP does not represent the Palestinian-American community. It represents only the Israeli-sponsored, Western-funded, and American-supervised, collaborationist Palestinian Authority in occupied Ramallah.
Here is a link to a photo gallery for the ATFP gala last month which you will find on the right side of the page. As you look at these pictures think of Gaza and ask yourself the following question: Can such an event and crowd, by any stretch of the imagination, bring any help, hope, or comfort to the 1.5 million Palestinians under siege in that beloved coastal strip of Palestine. Allah la barek la Al-Saud wal ATFP-May God NOT bless the Saudi family or the ATFP."
Posted by Tony at 5:50 AM